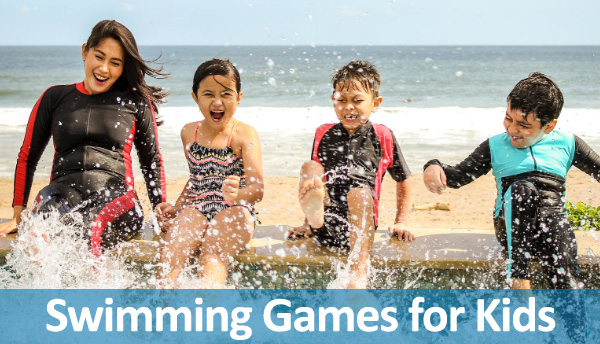 Swimming is not only good for health but also very enjoying activity for adults and kids. There are many benefits of swimming, such as physical activity improves cognitive abilities of all ages including kids. However we are not going to talk about swimming benefits in this article, instead we are talking about fun part of the swimming 🙂 more specifically swimming pool games.

Note: this list is keep updated, keep us inform about any other game that you think we missed.

Swimming Pool Games for Kids in 2020

In this pool game, you will require 4 or more players. It is a fun game. Designate an area in the pool where all the participants gather. Every member has to stand with their heads above the water surface. With mutual consent, you will choose It person. He will tag the rest. The tag player will stand still in the place with its handstand above their heads like a popsicle. A person cannot be tagged underwater.

You can add up to 5 or more participants. A member can put numbers or choose different ping pong balls for teams. One member will toss the balls in the pool while team members of both the teams will collect their respective balls. It is an enjoyable pursuit.

The things require are one noodle per player and a beach ball. Two teams are evenly divided. They serve the beach ball with noodles. It is important to keep it in the air. If the ball touches the water the opponent team gets the point.

it is a game played by an even number of players. Two players sit in the center of the pool in an inflatable raft. All the others try to knock them off the raft with the help of noodle.

It is a game for the brave ones. Players have to jump into the pool belly first. The game is to create the loudest sound of the clap when a player dives. It needs high pain tolerance.

Keeping an eye on the stopwatch, players take a deep breath and go underwater. They stay underwater for as long as they can. A judge keeps an eye on the recorded time. the player who stays under the water for long is the winner of the game. There is a warning of lightheadedness and hyperventilation with this game.

In this fun game, a person tosses a handful of various coins, nickels, dimes, and pennies in the pool. Players are asked to search the sunken treasure. They are given a time limit to collect the coins. The player who collects more is the winner. Players can dive in and collect all the coins at once or can dive more than once in the time limit.

In this game, even numbers of players are required. All the players are divided into two teams. One player is selected as a leader who randomly calls out a team. The called out team swims to the safest area quickly. Meanwhile, the other team tries to tag as many swimmers as they can. For a fun twist, the tag players now have to join the opposing teams.

It is a fun race on an inflatable object. It can be a tube or sharks or crocodile or anything. Players are called out to line up on their floaties on side of the pool. On the go, the players have to race to get to the opposite end of the pool on their floaties.

It is a fun game with rubber duck involved. The players line up on one side of the pool with rubber ducks in front of them. The goal is to race the rubber duck to the finishing line by using the player’s nose or breath. There is a strong warning of no touching or holding the duck. To make the game more fun players are allowed to divert opponents’ ducks but no hands involved.

It is a classic swimming pool game. It is a popular and simple contest. Players compete while standing on their hands in the water keeping their feet apart out of the water. The judge notices a time for how long a player holds breathe underwater. The player has to handstand underwater for the longest. If he falls over or his feet touch the surface, he loses the game instantly.

Eight or more players are required in this game. It is a synchronized game where teams have to be creative and funny to present their dance skit. In splash, dance players can use props costumes and even the lighting around the pool to enhance their dance presentation.

It is a creative and fun game of shadowing your opponent. A player has to move exactly as his opponent. When playing F.I.S.H a player copies all the actions of the opponent. Being unsuccessful in copying your opponent and spelling out F.I.S.H can lead to lose the game.

This game is about having fun with pennies inside the pool. The contestants are divided into two teams and both the teams are asked to search for the pennies. The team that collects more pennies wins the game.

It is a fun driving game for kids where they dive to the bottom of the pool and collect nickels thrown by their parents. The collection of nickels determines the winner of the game.